On the table: Waiteri hunter, Conan, Mammoth and then these figures: 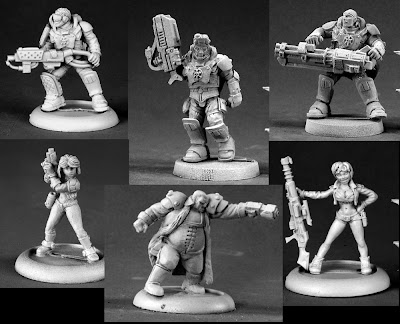 One Waiteri tribal member to go; a Conan to finish up and a mammoth sculpting project are on the docket. After those, I've decided on my next project. I decided to forego the Conan large-scale figures for now because I wanted to return to smaller scale figures.
I own the Doom boardgame, and one of the variants in the rules is a deathmatch. So I decided to try a few figures from Reaper's Chronoscope line to provide players with a few options other than the little plastic marines that come with the game.
I also have a few industrial bases (just like these seen with my biohazard troopers) left over on which I'll mount these figures. The raised base also gives me an area to paint player colors (to help those who forget which figure they had chosen.)
And yes, those Biohazard troopers were also for my Doom boardgame, but these new figures are better for the deathmatch. It's also another chance to do a few sci-fi types.
And as a little homage to my Waiteri tribe, the female sniper (lower right corner) will be getting Waiteri hunter war paint. She'll be a member of the tribe, just 20,000 years removed. I look forward to painting her.
Depending on how the mammoth goes, I see myself painting these at the end of August. If the mammoth gives me a lot of problems, I may take a short break or two from it and start one or two of these Chronoscope figures a little earlier.
Email ThisBlogThis!Share to TwitterShare to FacebookShare to Pinterest