Well my painting has slowed down a bit due to having the cat about. And I was gonna work on the mammoth when I realized I didn't have enough Sculpey do really do anything. Now, I have my copy of the Dark Sun campaign setting, so I've been reading that and polishing off my story to begin a new campaign. So that's taking some time out of painting.

Also, I've been anticipating the release of Gamma World (because it uses the 4E mechanics which I'm used to, but also because this was the very first roleplaying game I ever played ((in 1982)).) I hadn't planned on purchasing new minis for Gamma World, there would just be too many that I would want to purchase, with space dwindling around me (maybe it's time I sell off a bunch of my minis?)
But I hit upon a solution: 15mm! Since I last looked at 15mm figures many years ago, the ranges of figures has grown. It only took a few clicks for me to find these awesome gangers from Khurasan Miniatures: 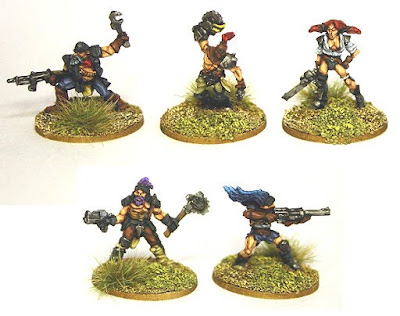 These are about as perfect as you can get for Gamma World. "But where are the mutants," you ask? WELL, Khurasan miniatures currently has a pack of mutants being cast up to go along with these post-apocalyptic figures. I haven't seen them yet, but I bet they'll be good enough. Khurasan also has a few aliens and other monsters throughout their other ranges that could double as mutants (and monsters.) At less than a dollar per figure, I could spend $50 and have all the Gamma World figures I would ever need.

Gamma World doesn't come out until October. Until then, I have a mammoth, some Chronoscope and a Dark Sun campaign to begin. (And oh shit, Charlie, you're gonna love my Dark Sun campaign after the stuff I added last night.)
Email ThisBlogThis!Share to TwitterShare to FacebookShare to Pinterest