On the table: War Rocket and Reaper 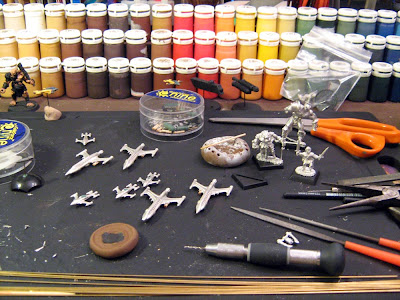 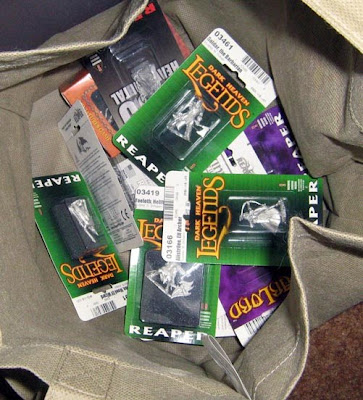 So my patron, Jeff, picked up a small load of Reaper figures for me to paint for his D&D table. This is great for me: I paint figures for Jeff, and he buys me stuff. With this batch, I'll be able to get Gamma World, a few more hobby supplies, and some more War Rocket ships. I've got 4-6 figures I'm going to start with, enough for Gamma World, but not too many that I can't also do my War Rocket stuff. I've also got a small bag of more Reaper from Jeff- around 10-15 figures(?) I haven't counted. If I can find a simple one, I may try some fast-painting techniques again.

As you can see on the table, I also have some War Rocket ships sitting around. I've been modifying them to fit my fictitious 523rd squadron. The squadron is a survey/scout/reconnaissance squadron, so I'm adding things such as sensor pods, antenna and (hopefully) radar dishes (I need to figure out how to make them that tiny). But the squadron is also know for fitting its ships with space torpedoes, so I've been adding a small torpedo under the wings of each Class II ship. My second order didn't beat Labor Day weekend, so I'll have to wait (until probably just Tuesday or Wednesday -- no biggie.) The second order essentially doubles what you see on the table, and adds a Class III ship.

I'll fill in on the details of the War Rocket ships conversion work once I get my second order and I start working in earnest. I may have Capt. Rip Sagan narrate those posts (much like the narration clouds in the War Rocket rule book.)

On a final note: I'm starting to varnish my Waiteri tribe. Once they are all varnished up and protected, I think I'll try to take a few group shots with them and post those here. Perhaps some more scenery pics such as those with the scouts a few weeks back.
Email ThisBlogThis!Share to TwitterShare to FacebookShare to Pinterest