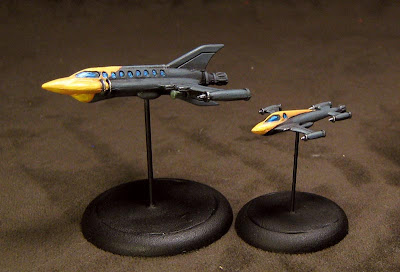 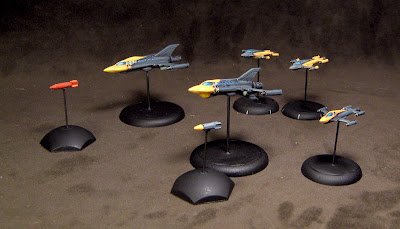 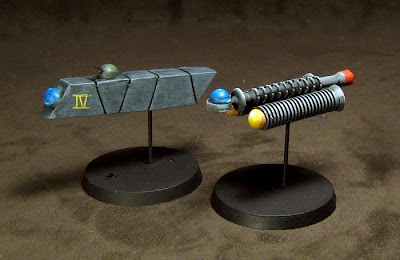 I've finished painting my first group of the 523rd for playing War Rocket. I like this paint job better than the first version (seen in the back of the torpedo run photo.) This version of the paint job "kills the Naboo" yet allows me to keep the yellow-gray combination.

It was a little difficult figuring out how to pull the yellow over the top of the fuselage on Hunchback (that's the Class 2 ship firing the red torpedo) with its characteristic sensor "hump," but none of the any other Class 2 ships should be too difficult to paint. In fact, none of this batch was too difficult. It took me almost exactly one listening of the Flash Gordon soundtrack to finish these (pre-primed.)
Rip, do you have anything to add?

"Damn fine ships, boy, DAMN fine ships! You folks might wonder why them torpedoes are two different colors. Well, we borrowed the red one from Ace McGuire's boys, and the other was from the 998th, but we had to give'em a quick paint job, to make'em look like sensor drones after Fleet sent a surprise inspector. I remember that day. I sure as hell am glad the Inspector didn't put his hands on the wet paint.
Another thing; them ships somewhat resemble birds of prey. Well, in the old days of the Galactic Protection Force, the 523rd was actually the 75th Star Eagles Squadron. When the Galacteers was founded, the 75th was reorganized into the 523rd. As the 75th, the gray on the ships was actually silver. Otherwise, the pattern has remained unchanged."

Interesting, Captain. Thanks for that little bit of history. In fact, I may paint up a couple of the Class 1 fighters using the old 75th's colors (simply changing the gray to silver.)

The last two ships are a couple support ships, a freighter and a tanker. The reighter is all Sculpey with a piece of brass rod for the gun. The tanker is made from random bits from the bits box. They're a little smaller than I would like them, but then again, it's a small squadron.

"Yes, they are small, but the freighter is certainly large enough to bring in a full compliment of torpedoes. Hmmm, I wonder if I can outfit that ugly beast to fire torpedoes on her own? That'd scare the willakers out of old Marduk, hehe."

UPDATE: I painted up a Class 1 ship as the 75th Star Eagles. I think it looks pretty slick. And it painted up scary-fast! About 10 minutes. I'll probably do one more like this. The remainder will be the yellow-gray combo. 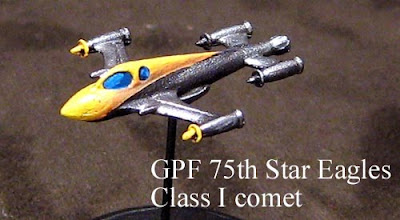