Here's the last of the Qwik figures! The last of the drivers for the Dirt Dogs. The cleaver blade came from a GW ork figure. The rope around the blade is twisted copper wire, which I think works perfectly as rope (and is easy to paint.)

I finished off all the other figures by giving them a good drybrushing of Foundry rawhide. This served two purposes: It added a layer of post-apocalyptic dust to everything, and it helped to kill the glossiness on some of the paints (my freelance driver in an earlier post shows some of that gloss. The drybrushing worked really well to dull it out.)

After a few days and lots of coats of varnish, and I'll be ready for my first games of Qwik! 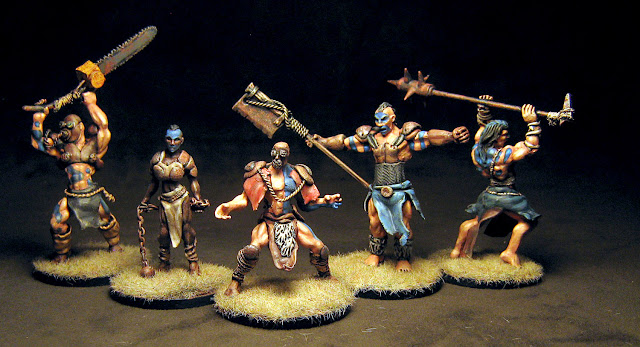 A note on drybrushing: When you drybrush your figures, remember that it's "dry" brushing (and I'll explain here in a moment). Some folks confuse drybrushing with a technique called "overbrushing." In overbrushing, you pull a brush with just a little bit of paint over raised detail, such as hair or chainmail, so that the paint lands only on the raised surfaces leaving the recessed surfaces dark or unpainted. In drybrushing, you load your brush up with paint, then you wipe as much paint as you can onto a paper towel. This should leave mostly dry paint on your brush. Then you wipe or flick (there are different techniques to this) the dry brush over the figure, leaving essentially a "dusty" layer of pigment on your figure. In fact, when I drybrushed these qwik figures, I could see little dust clouds getting thrown up as I flicked the brush to and fro. If you try to drybrush with paint that is still a little too wet on your brush, you'll get streaks on your figure. And since dried paint kills a good brush, that's why we use a crap brush :)

I like these figures! Despite being specifically made for playing Qwik, I can also use them as a post-apoc primitive tribe (alongside my Waiteri), or as post-apoc gladiators using Two Hour Wargames' Red Sand Blue Sky rules. And, you know, as I was doing these, I was wondering how hard it would be to do 54mm Road Warrior stuff.

The Qwik figures could easily play the part; all I would need would be a few vehicles, but that would be the hardest part. I have yet to find cars in 1/35 scale (1/35 is VERY close to 54mm). There are plenty of military vehicle models at 1/35 scale, but most civilian vehicle models are at 1/24 scale, and it's the civvie vehicles I think that make the best road warrior cars. Now, I've seen 1/32 scale cars, but they were still a touch too large for my tastes. Has anyone ever seen 1/35 scale models of civilian vehicles?