Thunderdome? Sure, why not. 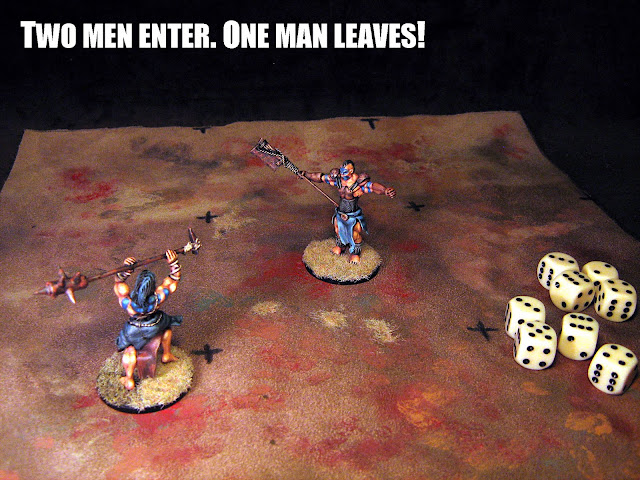 My friends and I had a lot of fun playing Red Sand, Blue Sky (Two Hour Wargames) this weekend. RSBS uses most of the same mechanics as Qwik. And with the movement in both games done via "zones," this them a bit of cross-over into boardgaming. I think this is why my friends (who are not really miniatures games kind of people) and I (who likes miniatures AND boardgames) enjoy these two games.

My friends preferred Qwik over RSBS (I think because they're also Blood Bowl fans). This usually translates as Qwik is sure to get a few more plays with my friends this year, but RSBS probably will only get one more play if any. I prefer RSBS over Qwik, simply because there's a lot less to keep track of, especially during solo play. But I LOVE the post-apocalyptic setting that comes with Qwik, so I'd prefer to play with friends when I can.

"Carmen, get to the fucking point."

Ah yes, well anyway, I've decided to go ahead and combine the two genres: Post-apocalyptic gladiatorial combat, combining my interests. What's great is that my Qwik figures are already outfitted for such a game! I have space in my figure case for 4 or 5 more figures, so I will be ordering more in the future (A little birdie told me new 54mm generic poses were in the works) just not sure when. These new figures will be converted specifically for gladiatorial combat (complete with road sign shields.)

When we played RSBS this weekend, we used my Qwik field, but it was really too large (though, we did block off a smaller area within the field.) So I've made a new field specifically for playing RSBS (either classical or my post-apoc version.) It has plenty of messy earth with blood and a little bit of arrid static grass glued into place (just a little; it's an experiment to see how well the grass sticks.) It's small (my own little Thunderdome at 3x3), but it's only meant for four to five figures at most. And if I need more space, I can still use my Qwik field.
Email ThisBlogThis!Share to TwitterShare to FacebookShare to Pinterest