None of my friends seem too keen on playing Dread Ball, but I'd still like to get the basics to try out (I know my friends will at least try it.) Still, $100 is a lot of money to spend on something that might not get played but once or twice (oh, it'll look pretty and be fun painting, but still- I could just draw a dirty picture on a $100 bill and be happy with that.) 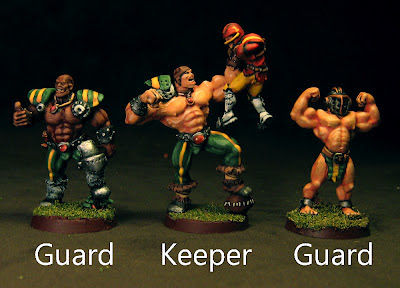 The compromise I'm looking to is to get a digital copy of the rules, as well as, hopefully, the deck of game cards which seem to be needed (Hopefully they'll be provided as an add-on in the Kickstarter.) I can make my own pitch (though, I might at least chip in for the MDF pitch), and I have plenty of Blood Bowl figures (four full teams) AND they're all painted. I have yet to play my Bad Bay Hackers, though. I took them out and determined who would be the strikers, guards and jacks. It was pretty easy to figure out; Hell, I even have a coach, some cheerleaders and a referee figure (all will be able to be used in Dread Ball.) 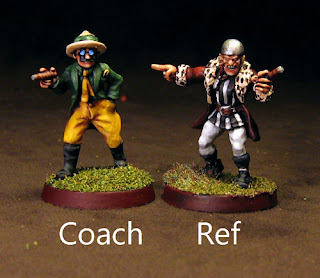 I have an ork team, too- they were even easier to figure out since the Dreadball orx only have two positions (Guards and Jacks). Even easier than the orks are my team of Wood elves: Judwan strikers -- done. Damn, that was easy.

Rules, pitch, figures and dice I have. The hard part will be getting the required game cards. Hopefully, Mantic will offer them as an add-on for their Kickstarter project. I don't see why not; there is a pledge level for just the digital rules -- the rules are no good without the cards. I'd even settle for some print-your-own cards.
Email ThisBlogThis!Share to TwitterShare to FacebookShare to Pinterest