Here's another group I finished for Jeff. I picked out a bunch of minion-type stuff that would be easier to paint -- mostly drybrushing. There are a few zombies (and a ghoul/flesh golem?) as well as plenty of skeletons. The zombies, I painted up in more "living" colors, so that they could double as thralls for the vampires Jeff wanted me to paint first. 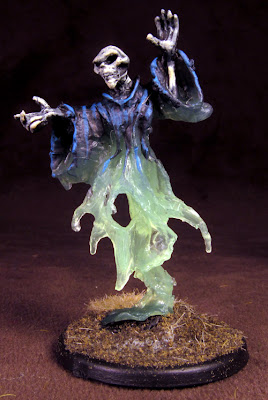 I also took out one of the translucent Bones figures - this phantom - and tried out something a little different, a physical being rising out of the ethereal mist. I think it worked out just fine. Not all the translucent figures have an element such as this, and I think some would be best left as just translucent figures to represent ghosts or spirits. I wonder when they'll be available to buy individually; I could use a few for my Ghostbusters collection.

The detail on these figures isn't as good as on metal or resin, so it's a little more difficult to paint. But still, I think the lack of detail on some of the figures with smaller features (such as the female vampire here) is worth the cheaper price. I hope the industry works on achieving better detail before (and if) it goes all-plastic.

I also received my first full set of Reaper HD paints (Thanks, Jeff!) So far, they are working great. I was a little worried because I had heard so many bad stories about the Reaper Master series (too much flow improver which thinned out the paint too much.) I had read that the HD (High Density) series also contained flow improver, but that the paints also had much more pigment. Well, they flow nicely and the coverage is great! I'll still have to do the "red" test. I have some Vallejo Model Red which does nicely, but it would be nice to have a back up.

Minor note: I'm mounting all of these figures onto Proxie Models bases using just super glue. I wasn't sure what adhesive would work best to attach hard plastic to soft/Bones plastic, but the super glue (Gorilla brand) seems to be holding fine. And since the figures are softer plastic and a bit lighter, they don't put as much strain on the glue bond.