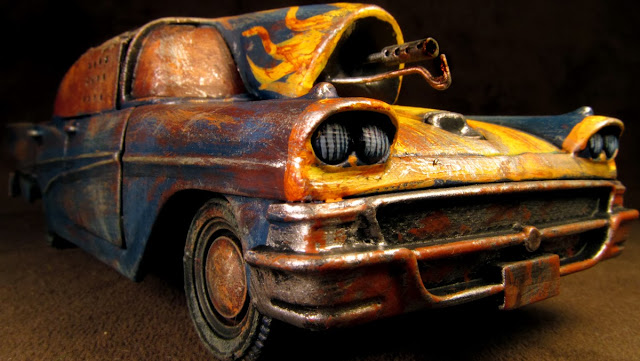 A couple things to show here. First off is my other 54mm/1:32 scale Machinas car, a 58 Ford Fairlane. I used (a lot of) green stuff to add the body work so I could fit the heavy flamethrower. 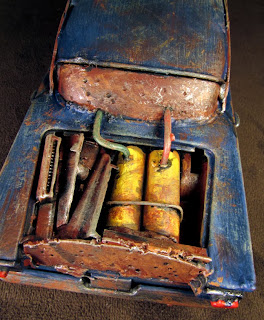 Since the hood would be permanently closed, I removed the engine. It's currently sitting in my bits box. Some of the extra plastic alongside the engine became a load of scrap metal for the trunk, next to the large fuel tanks.

And since the 1/32 scale version of this car had an open trunk, I chose to drop the flamethrower's fuel tank down into it. The tanks are simply some plastic tubing (from an assortment sold by Gale Force Nine.)

Something else to note: These vehicle are all made by a company called Arko. One of the minor cons is that the hoods/wind screens feel somewhat flimsy. To strengthen them, I disassembled the cars, turned them upside down and lined the inside of the hood/windscreen piece with a layer of two-part epoxy resin.

I know I was going to wait before purchasing any new cars, but I figured it would be nice to have one to do during my vacation coming up in a week, so I purchased a '54 Chevy Bel Air (also by Arko). I can't wait to do this one, because it will become my new Col. Jack's Special- my personal favorite of my collection. I also plan on doing larger versions of my ram car and a simple rusty gunship (from my Running Gunners faction.)

To help me get through the crappy Bones figures, I'll randomly pull some of the better figures from Jeff's collection to paint up. This griffon was sweet (and easy) to paint. Not much to say about it. It was a bunch of layers of browns drybrushed on, the then beak and talons highlighted with some orange and ochres.