1990. That was the last year I finished painting an entire unit for Warhammer 40K, until I finished this squad of terminators. These are some DeathWing terminators I picked up via eBay to beef up the figure selection for playing Space Hulk (and also just to paint for the fun of it.) 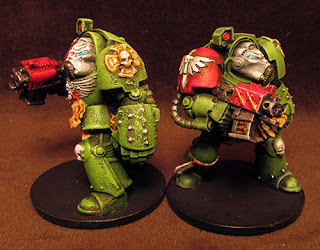 I spent a couple weeks trying to decide on a paint scheme and to create my own chapter -- I had done enough rust and heavily weathered figures that I decided to go with an old-school, clean GW look.

After a look through the Marine Chapter lists, I found the Aurora Chapter which were a light green with black trim. I read up on their history and saw that they had fought for the world of Satys against Hive Fleet Leviathan -- and that was my entry point: This chapter is made up of denizens of Satys who survived the invasion and battle. Who better to cleanse the Emperor's space of Tyranids than those directly wronged by the merciless menace? 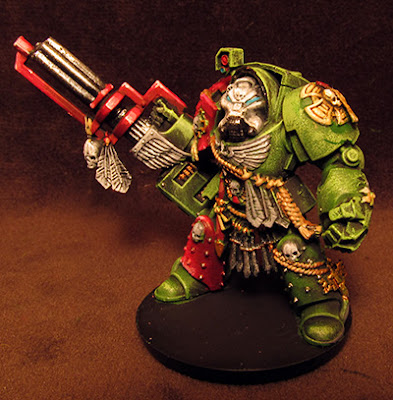 So I named my Chapter Satys's Orphans. I'm still a bit lazy and didn't bother filing down the badges of the Dark Angel (or Blood Angels from my SH box). I rationalize it as being second-hand armor passed down to the brand new chapter until they can create their own heraldry and icons.

They've kept the light green of their saviors, the Aurora Chapter. They've chosen white for their helmets to show that they are still "pure," that is, not yet fully battle-tested. The red accent represents their lust for blood against the tyranids.

I still think GW is the evil empire, but dammit, they make a figure that is easy to paint despite all the details (and I found myself having to go back again and again to paint missed details.) The ease of painting made this experience quite enjoyable.

I have several more terminators to paint yet. Oh, and I have all the figures from the game Deathwatch: Overkill, too. Hopefully, this won't become too bad of a habit with me and GW. 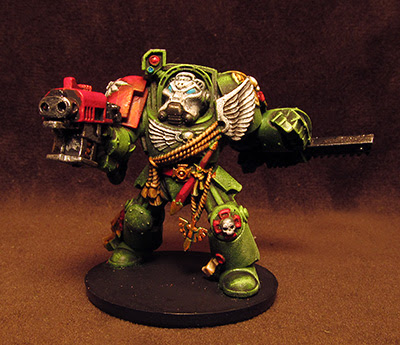 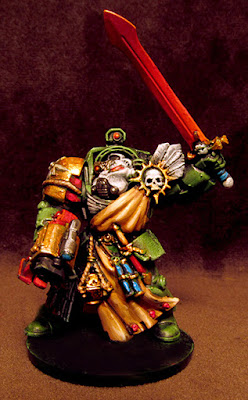