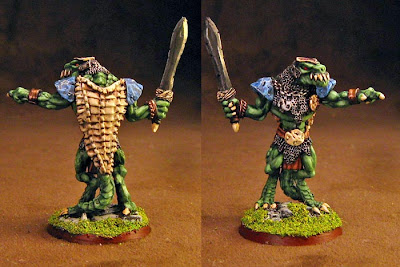 I finished a couple more today. Reaper No. 2408 Lizardman Tyrant for Jeff and War Crow's Shinmen Tadaaki. I, again, used a simple scheme with the lizardman as well as a basic layering technique to give it more of a characterful feel as opposed to a realistic look. Using that basic technique also speeds things up.
With the samurai, I took a little time to add a couple more layers and try to blend them a little bit. I also kept the color scheme simple (two colors), to keep a clean look on the figure (also the reason for the lack of any Japanese patterns on the clothing.)
The samurai is also the first time I've replace a sword blade with one I hammered out myself. I actually used a hammer on an "anvil" (I won't say what I used) and flattened out a small strip of brass rod. The rod was bent into the gentle curve of the katana before I hammered it. After it was flattened, I used some clippers to nip off the end of the katana to give it its correct shape.
I'm always nervous about figures with small swords bending/breaking off with as much handling as my figures get. I did one other katana blade as well as a couple dagger blades on a couple other War Crow figures I have. I'll show those much later whenever they get painted.
Email ThisBlogThis!Share to TwitterShare to FacebookShare to Pinterest