Two characters from the same model 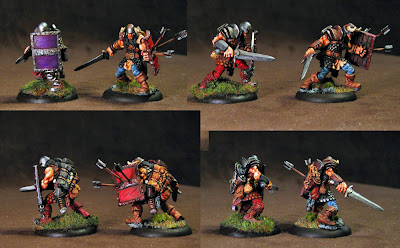 This is a follow-up from a project from a while ago. These two figures are actually the same model (Reaper 3282 Uric, adventuring fighter.)
The conversion was very easy. The sword arm is actually a separate piece starting at the top of the forearm. On the figure to the right, I simply glued the arm into the position I desired. Done.
The figure to the left to a little extra work; having the arm come that far forward left a little bit of a gap where the piece connected to the main figure. I simply filled this in with a tiny bit of greenstuff.
The original shield arm has been left alone on the right figure (with long pins doubling as arrows added.) The left figure, however, took some bending -- honestly, I can't remember if I bent the arm or cut it off and repositioned it. But I believe it can be simply bent to that position; the shield is large enough to hide any tears or marring of the arm that may occur.
I took the horns off the left figure, giving the warrior a simple skull cap. I also added some greave armor and a bit of armor on the toe of the leading foot.

I like both versions of this figure. The right one was my first 4E D&D character. The left figure was a project inspired by a pottery (oil lamp?) engraving of a gladiator tucked behind his shield presenting a solid armored front despite his relatively lack of armor. I figured the character (a defender in D&D) should look like he's there to take a pounding; He certainly turned out as I had hoped, hunkered down like a turtle.

A note about washes: I used a wash on the left figure. I didn't let it dry entirely before I flocked the base. The problem wasn't of flock sticking to the figure, the problem was that I use superglue to flock (oh yeah), and the fumes from the glue formed a ghostly white dust (for lack of a better word) on the bottom portions of the figure (like hard water stains.)
This hadn't happened before (well, once or twice when I painted the base right after flocking), so I'm guessing that the wet wash (and/or wet paint) is the perfect surface for this "dust" to form on.
SO, if you use a wash, or flock with superglue, make sure everything on the figure is dry first.
BUT, if you do get a coating of white dust, a damp brush can usually be used to scrub away most of the dust. My figure had to be retouched a little, but everything worked out in the end.
Email ThisBlogThis!Share to TwitterShare to FacebookShare to Pinterest