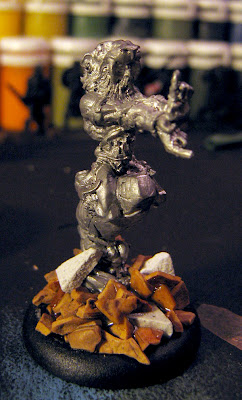 Things have been going really slow with the painting. After I finished that Drac Mac Syro last week, I've been looking at my old Confrontation barbarians army. I think I'll leave most of it alone; the painting isn't bad and represents a time in my painting career when I picked my skill up to a new level. But I am taking one or two figures out of the army to repaint. The first one will be Kryan the hunter (dude riding a rock.) I'm giving him an extra-rocky base; it will also have some static grass growing here and there.

I've also STILL been painting the gladiators. I want to get them finished before I go on to anything new (have I said that before?) The flesh on all of them is finished (the photo has bad lighting, so none of the highlights can be seen.) The figure on the far left (kneeling) will get the celtic woad tattoo treatment. 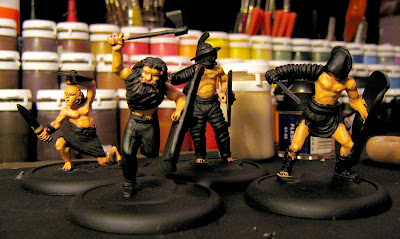 I'll be heading to Kansas City sometime soon, and I'm going to try to make it to Tabletop Games in Overland Park- I'm hoping they still have a few Confrontation minis left yet. If not, they'll still have a nice assortment of other stuff I can usually only find on the Internet.
Email ThisBlogThis!Share to TwitterShare to FacebookShare to Pinterest