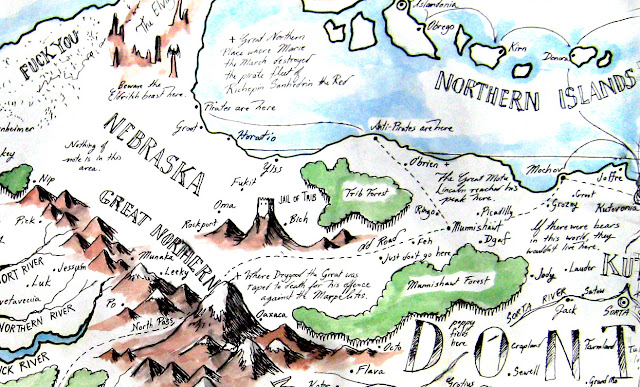 I found this while cleaning out my closet. This is a map of a world I created for use with Savage Worlds. The world is called Dontunderstan. (And this is a terrible collage job- but it gets the point across.) The game was meant to be comedic, hence names of places such as "Nebraska" and "If bears were in this world, they wouldn't live here."

I put together the map as a basis for a fantasy game in which everything would be improv- save for the copious notes on the map itself, there would be no pre-written adventure or plotpoints. The only thing I'd have on hand besides dice would be a few basic representatives of the species of this world pregenerated.
Unfortunately, the weekend we were supposed to game is when one of my grandmothers died.
It's been six years, so maybe it's time again to try to get the gang together and see if they're ready to have a go at Dontuderstan?

The map is roughly 4 1/2 feet long. I had a fountain pen (cheapish Sheaffer pen), some watercolors, a big sheet of butcher paper, and a couple free evenings.
Email ThisBlogThis!Share to TwitterShare to FacebookShare to Pinterest