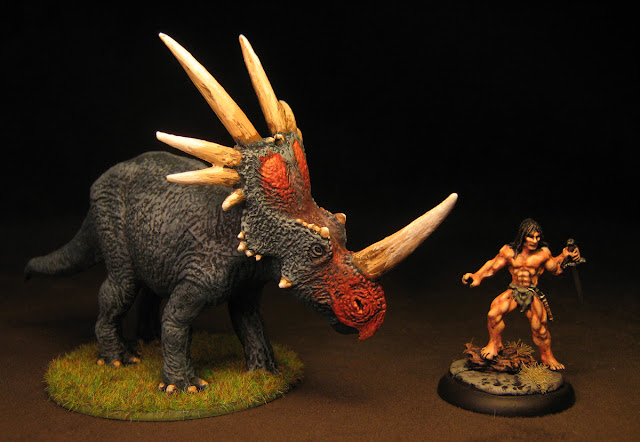 Since I rediscovered my simple priming technique for soft plastic figures, I've been looking for stuff to paint. I've done most of the FFG monsters I wanted to do, and I was looking at some of the D&D prepainted stuff online when I realized I have a large collection of vinyl dinosaurs.

I'm not going to paint them all -- at least not all at once. Here I've painted a styracosaurus and a sinraptor. They're both the same scale (1:40 scale), so most of the dinos I have will be a touch too large for my 28-33mm stuff. They'll also be a touch small for my 54mm Waiteri tribe (but they seem to match almost perfectly my 40mm Old West figures- Oh boy!) But when you're mixing dinos with old west, cavemen or gangsters, who's worried about scale?