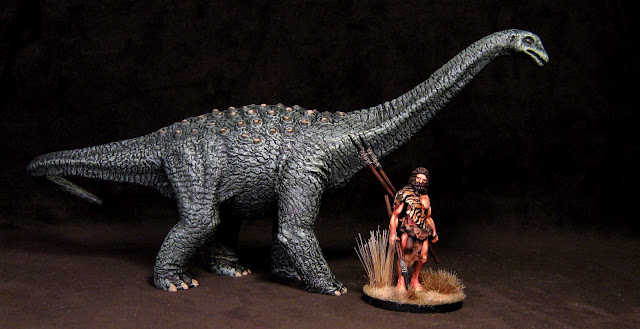 Here's a couple more repainted dinosaurs. Both sculpts are by Schleich. I decided to keep the schemes on these two nice and simple. The saltasaurus has a muted green-gray palette (difficult to see here, because I'm still having trouble with my camera settings with these larger figures.)

The human figure, again, is 54mm to give you some reference. And yes, saltasaurus is that small (being one of the smaller sauropods.) The other dino is an anklyosaurid called saichania. Both of these dinos are from the late Cretaceous. (and so is the carnotaurus I'll be painting later- hmm, I wonder if Schleich is just doing late cretaceous specimens?)

I've got one more dinosaur to do, a carnotaurus (my favorite therapod) by Boston Museum. After that, I think I may get a Doctor Who mini or two or three to paint; I'm (finally) watching the series (reboot seasons) for the first time, and I'm lovin' it. I plan on getting the "not" figures from Heresy, and the TARDIS from Hasslefree. Plenty of good Doctors to choose from- and a K9 (all from Heresy), but I'd still like to find a good Rose Tyler figure.
Email ThisBlogThis!Share to TwitterShare to FacebookShare to Pinterest