Whisper out of madness

Here are three more repainted prepainted Fantasy Flight Games Arkham Horror monsters. We have, from top to bottom, a Mi-Go from Lovecraft's "The Whisperer in Darkness"; A Yithian from "Shadow out of Time"; and an Elder Thing from "At the Mountains of Madness."

These aliens are from my three favorite Lovecraft stories.

The Mi-go was a simple drybrush job. I threw him onto a brass wire to get him flying. Not the best mi-go sculpt ever, but the price was right, and he was a no-nonsense figure to throw together (paint.)

This Yithian is from my favorite Lovecraft story, "Shadow out of Time." It's been a while since I actually read the story, so I wasn't quite sure what colors to use (Thanks, Allison for the heads-up.) Again, the sculpt is ok, but it's not technically accurate. Still, like the mi-go, it's an easy figure to deal with; there's no construction to deal with. Having said that, the FFG sculpt had a three-pronged clasper type hand on the center stalk instead of the four red "trumpets," so I had to use some greenstuff to make my own.

The other challenge was to paint the cone to look as if it was iridescent. To accomplish the feat, I used the same technique I used on my Writhing Wailer, but this time, I kept the colors (green and purple in this case) as subtle as I could. I think the effect turned out pretty good. 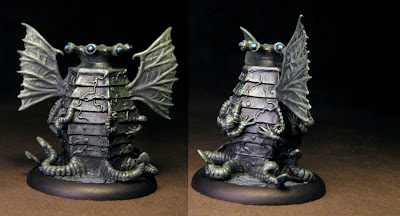 And here's the Elder Thing from "At the Mountains of Madness." Again, the sculpt isn't accurate- if I remember right, the Elder Things had five wings and only five "eye" stalks. I also couldn't much mention of the colors (I need to find my old books!) "Gray" was the only actual color I found mentioned anywhere. What I'm sure about is that the Elder Thing wasn't that carnival of color FFG had him prepainted as. I hope.

As inaccurate as some of these sculpts are, I still like these figures. I had my eye on the RAFM figures for a while, but I wasn't ready to deal with all that metal, construction and careful storage down the road. The FFG figures gave me the chance to own some of my favorite Lovecraft monsters without all the hassle. They're also a little larger, so they fit my 30-33mm pulp and modern figures. The Yithian and Elder thing above are mounted on 50mm lipped bases, by the way, to give you an idea of how large they are.
Email ThisBlogThis!Share to TwitterShare to FacebookShare to Pinterest