The parasaurolophus is my favorite dinosaur species; I don't know why, it just is. And this sculpt, by Schleich, is my favorite of the three sculpts I own (the others by Carnegie and Battat.) It's got a nice pose; there isn't the hypothesized webbing between the crest and neck; and the figure is very stable - it won't tip over easily. (The Battat sculpt looks nice, but it's stance is delicately balanced; a touch from either size sends the poor thing over on to her side.) 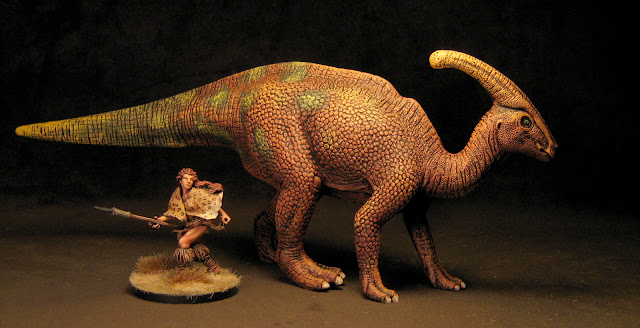 To give you an idea of size, the figure next to this parasaurolophus is one of my 54mm Waiteri tribe members.

I need to readjust the lighting; these dinosaurs are too large for my photographing space, so I have to push them back, along with the lighting, and my camera is compensating in an unexpected fashion (making the darks darker and the lights lighter). It's ok, though - the camera (an older Canon A460) has very few manual settings and otherwise gives me great photos. We'll just have to settle for dramatic-lit dinos for the time being.
Email ThisBlogThis!Share to TwitterShare to FacebookShare to Pinterest