I finished the rest of my samurai, including a couple Reds and a couple ronin. The two kneeling Red ashigaru are a couple of my older figures repainted. I repainted them to help beef up my smallish Red faction, which will oppose Lord Kaage's retinue. 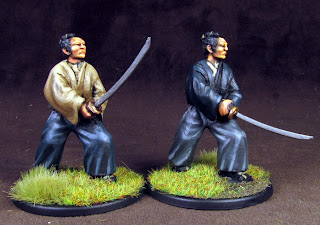 I also have a couple more ronin here, so that I have some more sword-wielding options when deciding on scenarios for games.

I kept them simple, with muted colors -- nothing too bright. I converted these by filing away the kataginu shoulders, and repositioning the swords (by filing cutting away the original sword guard and adding my own facing in the direction of the new blades.) 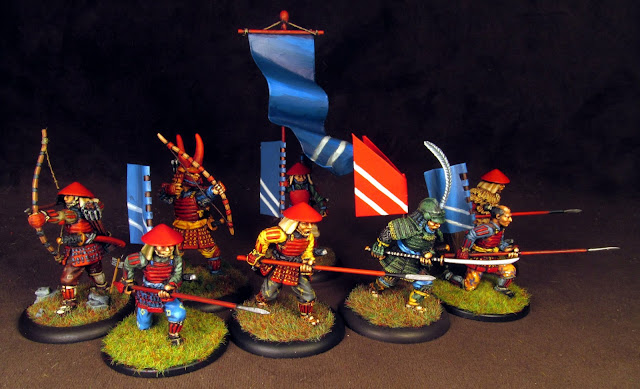 From here on, I think the plan for this range is to add a couple more ashigaru to the Reds, maybe another ronin/samurai or two, and to start figuring out some civilian conversions (I have two or three ideas already.) For the time being, though, I have enough figures for three buntai for Osprey's Ronin game (and a mess more figures than I'll ever need for some micro-skirmishing using Two Hour Wargames' Red Sand Black Moon rules.)

And just for the hell of it, here's a picture of some of Iga's finest: