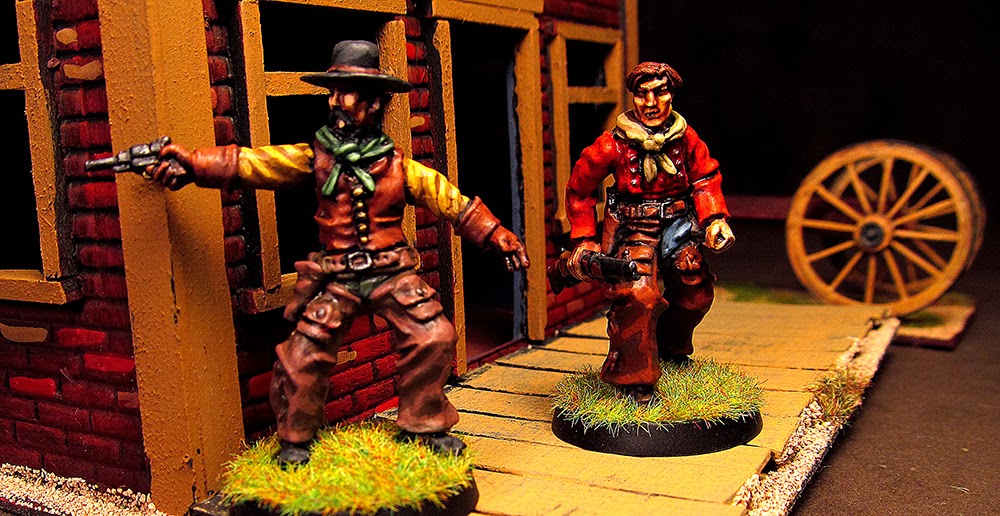 40mm old west?? Yep. One of the pleasant surprises I found when I took the collection out of storage were four unpainted figures, including these two cowboys.

Most of my collection is from HLBS, but these two are actually by Knuckleduster Miniatures. (And I just discovered that you can order many of the old HLBS figures through Knuckleduster as well; one-stop shopping!) There are a few things I like about the Knuckleduster 40mm figures.
-- Most of the figures come with separate heads and right arms, so a lot of variety can be achieved.
-- Many of the foot figures also have mounted versions (sold in separate packs.)
-- And there is a small selection of wounded/dead cowboys, and even a wounded horse.

So, point being, take a look at Knuckleduster. Oh yes, many of you will say, "These are great, but 40mm is not my scale." Lucky for you, Knuckleduster also has an extensive selection of 28mm Old West -- even some "singing" cowboys.

I have a third Knuckleduster figure sitting around somewhere. I'll have to dig him out. I also have a couple more old HLBS figures sitting on the table almost done. They'll come later.