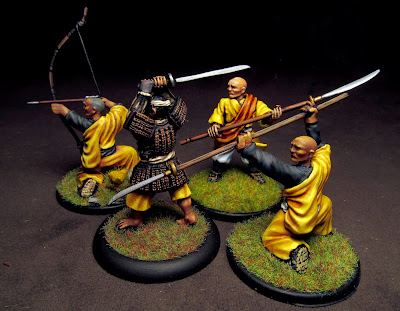 Here's another figure made using Steve Barber's multipart samurai. Unlike the others, this one has had some conversion work done.

First, I swapped in the head from the monk archer figure. Then I added a sash using green stuff. To give the illusion of a robe, instead of sculpting the entire robe over the figure, I simply added the two bottom flaps tucked under the obi/belt, and painted the flaps and the kimono top the same color (yellow.) The naginata was hammered from brass rod as usual, with the hand guard made from a little cured circle of green stuff.

I'd like to add a couple more monks, though, I'm not quite sure how I'll go about it. I'll probably use another multipart figure, but I'll look through Steve's catalogue to see what other monk-ish conversions are awaiting as my confidence with green stuff grows. I could do almost the exact conversion to Steve's peasant figures as I did with this figure, but  I'd need to get some more archers from which to swap the heads. In any case, that's a project for later; I have a couple more rockets on their way!
Email ThisBlogThis!Share to TwitterShare to FacebookShare to Pinterest