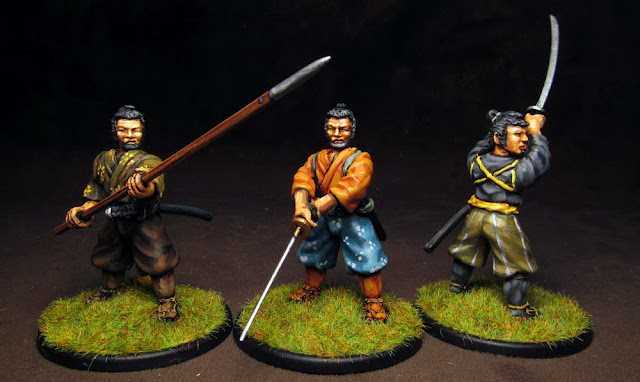 Here are the first three (of four) multipart samurai/ronin by Steve Barber. None of these figures have had any conversion work done to them; they were all done right out of the box.

The figure comes with a torso, and a choice of head and arms (holding spear or sword.) The arms a bit fiddly, but nothing some basic modelling skills can't handle. The sculpts are Steve's usual high quality, and these figures will fit in with and expand nicely the collection I've already built up. 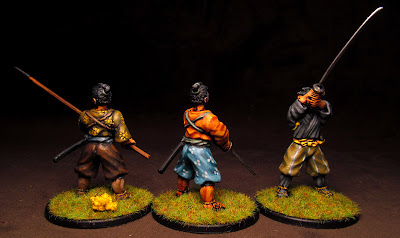 I have another archer to paint; I swapped the archer's monk head for one of the new heads from these multipart figures. The fourth mulitpart figure I have has had a bit of conversion work done to him. I left him out of this bunch to emphasize how easy it is to make a variety of figures without the need to convert. Now, if you DO want to convert, the multipart figure really opens up the possibilities. Anyway, that fourth figure has been converted into a naginata-wielding monk. I'm slowly but surely building my small cadre of monks.

Other things that I might commission in the future could include new heads for this figure, or new arms (another sword pose? shooting a bow or arquebus? drawing a sword?) Perhaps a new torso/legs to fit the already-sculpted arms and heads?
Email ThisBlogThis!Share to TwitterShare to FacebookShare to Pinterest