Proxie Models Bases: Not too shabby

My small delivery of Proxie Models bases arrived today, and I think I'm going to be happy with them- enough to make them my go-to base for all my basing needs.

The base I'm showing here is a 30mm base - what I use for most of my figures. It's the same width (of course) as the standard lipped base but the lip is much less pronounced, allowing for more space on top of the base. There is still a slightly discernible lip around the top, giving me just enough of a border for when I want to drop in some green stuff to make a flagstone base or what not.


Though the bases are shallower than the usual lipped or basic slotta base -- and shallower is actually what a lot of people prefer -- the base is also solid. It's not hefty, but when you hold it, it feels like a solid, well-made base. The shallower aspect will also make for a more stable base. I'm also kind of partial to the bit of texturing on top of the base. All you need is to drybrush a couple layers of browns, drop on a couple grass tufts and you're good to go!

Another thing you should note is that these are NOT slotta bases- they have solid tops. So if you have slotta figures that you might want to base on a Proxie base, you'll have to clip the tab off the bottom of the figure and pin the figure to the base. This is not a problem with me; it's almost a standard procedure. 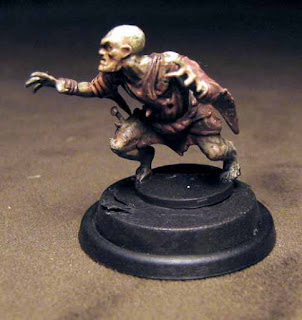 Another minor improvement these bases will add is when basing integral-based minis. The issue I have with putting an integral base mini on a a standard base is that once it's flocked/grassed (to hide the integral plate), the figure appears to be standing on a small mound. Having the extra area on top of the base should minimize this by providing a slightly longer, and thus smoother transition from the base tot he bottom of the figure's feet. Again, this is only a slight improvement, but an improvement nonetheless.

Proxie Models seems to have all the standard base sizes: 20, 25, 30, 40, 50 and 60mm rounds, 20, 25 and 40mm squares, chariot bases, cavalry bases, GW style bike bases, DBX bases and even seom 30mm hex bases (which I plan to get to augment my Dreadball bases, which I believe are also 30mm. I'd use Proxie Model bases to rebase some old Blood Bowl figures for use in Dread Ball.) Update: Looks like Dread Ball bases are 25mm. I'll give Proxie some time; I bet they'll make some soon enough.

Anyway, it's a small company, they don't sell much, but all of their bases seem to be perfect for the hobby. Here's there link one more time for you: Proxie Models