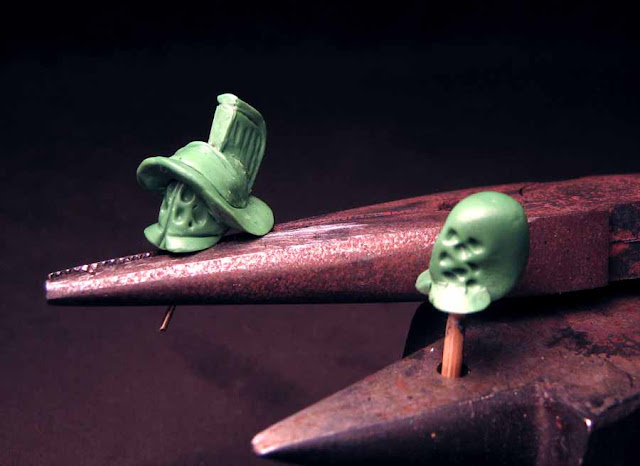 Well, as you can see, I've already finished sculpting a gladiator helmet. I would call this one a smashing success (especially since this is my first try at a proper helmet.) It's rough all around, but that's easy to explain away: It's a battle-worn helmet. (Or, I was lazy.) Both of these helmets are roughly 54mm scale.

I only realized halfway through the process that I should have been taking photos. That's why I started a second helmet (shown on the right in the above photo.) The first step on my first helmet was to apply a thin layer of green stuff over a head-ish shaped piece of already-cured green stuff (the core). With my second helmet, I've bypassed the core and sculpted the, head mass, face mask and neck guard all with one piece of green stuff. It's a little more difficult to keep things clean, but it was worth it to skip at least that first step.

The next step on the first helmet was adding the front of the brim. After that cured, I added the back half of the rim, and then the crest whose shape I cut out of a piece of cure green stuff. Later, I added the extra plate on the front of the helmet and some extra green stuff around the crest, which I could then engrave a little bit. Excess from the crest was pulled down to fill in the gaps where the crest and crown of the helmet met.

I'll try to show later, as I complete my second helmet, a little more detail in how I did each of the steps I just described.
Email ThisBlogThis!Share to TwitterShare to FacebookShare to Pinterest