A point on something I mentioned in my last post (don't forget to check it out; I posted it at the same time as this post): Steve Barber's samurai range is not necessarily small. Relatively speaking, yes, there are only a few choices. But they are good choices. Steve has created just enough different figures (and the right figures) for a player to actually field a large army; there is infantry in a few poses with spears (and a couple with guns and an archer), a couple "officers," some banner men and a few samurai, all that you need for a basic army. In any case, you can do a massive battle with the figures available.

But do you need a lot of figures to play a massive battle?
I don't play large armies myself, but Steve's range is great for skirmishes as well as something I would call Battle Events, occurrences that happen in the midst of a larger battle. 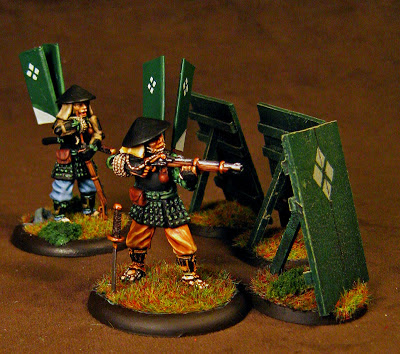 For example, you could have a samurai general challenging another, and around them surge a few ashiguru. Or maybe a line of teppo (gunners) are trying to survive the charge of some ashigaru? Or you could just have a couple lines of ashigaru fighting over varied terrain (trying to take a section of castle wall, or fighting for a captured banner, for example).

As for rules mechanics, these are still essentially skirmishes, but the narrative is different. Instead of your campaign being a chronology of small skirmishes over time, they are a series of simultaneous events within the same large battle. Perhaps you could do a full set of events which would effect the next set of events, the totality of which you could use to determine the results of the over-arching battle?

Going about a battle in this fashion, you don't need to spend hundreds of dollars on a ton of figures.  All you need are some basic infantry and a varied set of leaders and samurai, (all of which, as I mentioned, are provided by Steve Barber's range.) Battle Events could much more easily be accomplished in 28mm, especially with a range as comprehensive as the Perry's. But for fights with fewer figures, I prefer larger figures, because I want my battles to be much more personal affairs. 54mm samurai are too expensive; 42mm are not.
Email ThisBlogThis!Share to TwitterShare to FacebookShare to Pinterest