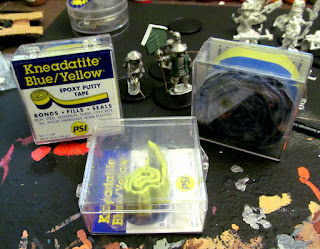 I use green stuff in ribbon form (though I understand that tube form, with the two colors separate, is preferable among the more serious hobbyists.) Still, I like the ribbon form because I can get it on the cheap. I go through about 72 inches (two rolls) of green stuff "ribbon" a year. And two rolls, with shipping, only costs me $30 (a 36-inch roll costs me $12.50.)

This is the best price I think I've found. Though, honestly, I haven't looked around in a while since finding my new supplier; maybe there's a better price out there?
Anyway, I was running low, and with new samurai on the way, I needed to resupply, so I just wanted to drop a couple thoughts on the subject.

Oh- I guess I should let you all in on where I get my supply: Anything Mechanical, which makes sense; kneadatite originally was created as a plumber's putty. They also sell other putties and epoxies, though I'm unfamiliar with any of them. 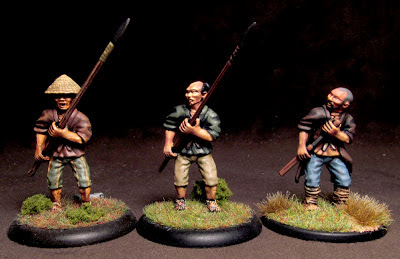 I'm enjoying my many  peasants displayed on the table and had almost forgotten that my entire peasant force was converted from just two poses. If you look on Steve Barber's web site, the two poses are listed as "SAM22 Peasant ready with yari," and "SAM23 Peasant advancing with yari."

Below are a couple photos showing all the conversions from each pose. The original, unconverted figure of each pose is to the far left in each photo. For SAM23 (with the upright spear,) I'm already conjuring a couple new ideas, though they'll require almost wholesale dismemberment of the figure (well maybe just an arm or two.)

One idea is to remove the forward arm and resculpt a new arm that would be stabilizing a yoke over his shoulder with a load of a couple baskets. If I can pull off that sculpt, I could use the exact same conversion to create a couple palanquin carriers! (Something I've been wanting to do for a while.) If I can pull the conversions off, these would be my first civilian figures.

And if I do a palanquin, I would convert a third SAM23 pose to carry a paper lantern. (OK, so not so much a conversion as it is just replacing his spear with a paper lantern.)