I had a extra axe just laying about, so I gave it to my first peasant here. Since the axe is uncommon, I worked it into this figure's character background, which is also uncommon. He's a peasant who, when he was young ran away from home to become a pirate, smuggling contraband to Osaka (or some such jazz.)

His stint on the waters was short, but among his meager booty were this large axe and a striped shirt he got to be showy. Since leaving work as a pirate, he has hit the roads, but he has little money left over to stay at inns. So he had made himself a poor but functional tatami mat, which he keeps rolled up and slung over his back.

The only conversion I did to the second figure was adding a beard and a straw hat. I gave him gray hair, and since he is older, I have dubbed him Uncle Gon, one of the characters from the book, "Musashi," about the life of Miyamoto Musashi. 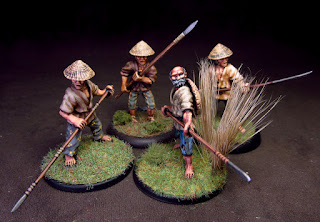 I have enough peasants now to split them into a couple groups. I have about equal numbers of bare-headed fellows and "hatted" fellows. Those with hats will be my farmers faction, while those with bare heads are my laborers.

I have the two ninja, the samurai and the ronin left yet to do. These paint up faster than I remember, so I may get to them relatively soon. 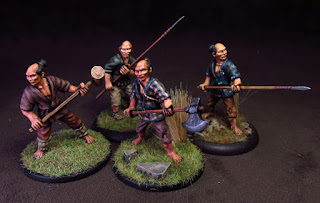 My 42mm collection is building. These, along with all my 54mm stuff, are still my favorites among all my collections. After each batch, I think to myself that I've exhausted all my ideas for converting  Steve Barber's small range of samurai, but then I get a few ideas, purchase some more and have a week or two more of fun.
Email ThisBlogThis!Share to TwitterShare to FacebookShare to Pinterest