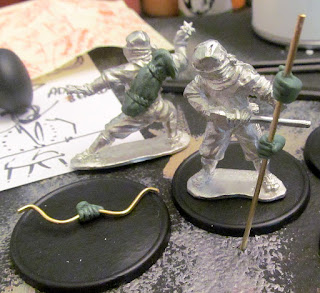 Just a quick update to show that I've began the ninja conversions. I've sculpted hands directly onto the weapons, a spear and a short composite bow.

The ninja at back, throwing the shuriken, also has a bow case added to his back. Later I'll file away the throwing star so it looks like the ninja has just released an arrow.

The ninja to the right has had his hands cut away to allow for a fit of the spear hands.

I love Steve Barber's ninja, especially for their diversity in armaments; these two conversions will add only more variety ... and fun
Email ThisBlogThis!Share to TwitterShare to FacebookShare to Pinterest