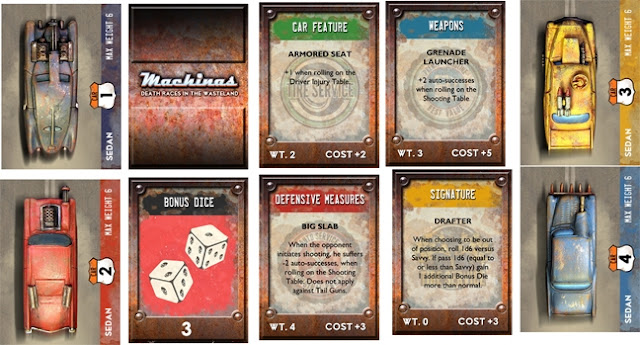 Ed sent me the first sample images of the cards to be used in Machinas. There will be multiple decks available (depending on how far the crowdfunding goes.)

The cards have information on them such as weapons, signatures and defensive measure, along with the specific rules for those modifications. And for those who don't want to use diecast toy/model cars or miniatures, there are vehicle cards you can use instead.

The cards are great because they allow the game to be easily transportable. And since there are only so many weapon cards of certain types, it also helps limit the resources available to would-be racers; it IS the post-apocalypse, after all. (To have a weapon/feature added to your car, you need to have the card in front of you.)

I'm not sure specifically when the Machinas crowdfunding campaign will begin, but it will come after the All Things Zombie campaign which is under way. If you haven't looked at the ATZ Indigogo campaign yet, I urge you to take a look before it ends!
Email ThisBlogThis!Share to TwitterShare to FacebookShare to Pinterest