Done!! They're all done! Until I put in another order, that is. This samurai is in the running as my favorite (my favorite is either this one or the black-armored samurai with the carp-tail crest.) The armor on this one was a little easier to paint- or at least I made it easier on myself. I simply drybrushed the colors on the armor.
The large plume, orginally intended to be a group of peacock feathers, worked better as one large feathered plume. And, yes, I did paint peacock feathers first and painted this straight over them. No worries, I'll have another go at peacock feathers another day.
I'm REALLY happy that the nagimaki turned out well. I figured it would look good, but the paint really brought it out. Quick note: In case you missed it from earlier, that nagimaki is scratchbuilt- If you order this figure, you'll get a yari (spear), not the nagimaki. Though, I bet we could convince Steve to make one :)

So that's all the samurai for now. Sounds like folks want to see that Japanese house. That project will take a bit of doings: I need to pick up the materials, draw up a plan (oh wait- I HAVE drawn plans! I'll try to remember to post them later), and get into the building mood after having been painting nonstop since the middle of December.

Until I start building that house, I do have a couple smaller projects lined up. I have a Reaper figure I've thrown together and converted a touch, and I have a Copplestone Future Wars trooper in bio-suit I want to try. The trooper I think I can do in one sitting (with a couple breaks of course.)

I'll be keeping my eye out for Steve Barber's next samurai releases. I have a general idea of what I want to get next, but I want to wait a bit to see the new stuff, too. 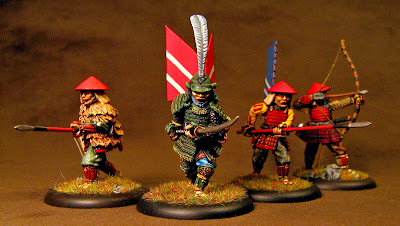