Gladiator school is in session 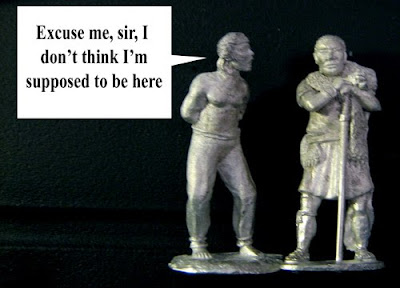 They've arrived! A big handful of 54mm gladiators is sitting on my table along with a host of extra bits (for conversions) including a bound captive (damnati) to feed the lions (I don't have any lions ... yet.)

Blackcat Miniatures is top notch!! I sent an e-mail last Friday with a minor query about availability of the gladiators. I got a response Saturday that the gladiators would need to be cast anew on Monday. I received them today! Less than a week from query to happy! 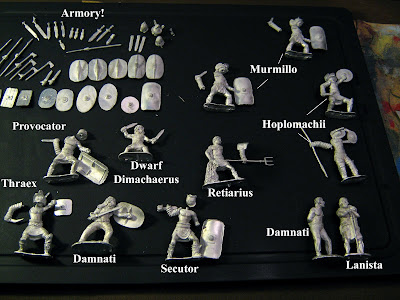 Anyway, the gladiators are all multipart, and somewhat "modular." For example: I will be swapping helmets between the secutor at the bottom of the pic and one of the murmillos at the top (since both classes have otherwise similar armor.) So now I have one secutor and two different murmillos. Also, I have taken one of my two thraexes; I'll give him a small round shield and a spear to make him a hoplomachus. (I'll have to order another hoplomachus and turn him into a thraex later.)

I'm already looking forward to a possible future order. It'll probably include another secutor, a german or two to convert into a second retiarius, a couple condemned legionaries, and another hoplomachus and thraex. And with a combination of great communication/customer service/and speed, Blackcat has made the possibility of a second order very likely!
Email ThisBlogThis!Share to TwitterShare to FacebookShare to Pinterest