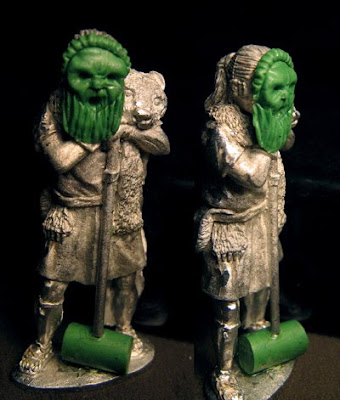 Charon who? You know, the guy who ferrys dead folks across the River Styx (domo arigato) on their way to Hades.

In terms of gladiator contests, an official dressed as Charon would stand aside wielding a large mallet or hammer. Once a victor in a fight had been determined and the defeated were killed, Charon would take his hammer and whack the poor fellow on the head to insure he was dead. Then other officials would drag the body from the arena floor. Sources are conflicted as tho whether "Charon" was a regular at (or even attended any) gladiatorial games, but I had the figure and the inspiration, so at least my games will have him.

I sculpted the mask as it sat on a piece of plastic and set it aside to cure. Then I filed the face of the figure flat so that the mask would have a nice base area on which to be glued. The mallet head is simply a rolled piece of greenstuff whose ends I cut off once the piece was cured. I snipped away a piece of the original rod and slipped the mallet head into the space- instant hammer! Not seen in this pick were a couple, tiny pointed ears that will be fixed to the mask. 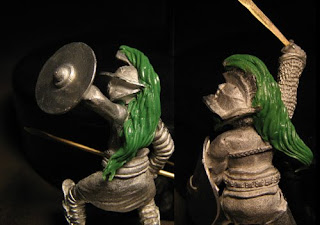 Quick digression: The horsehair crests have been sculpted. I'm not completely happy with them, but I'm not disappointed either. What I have learned at this point is to not try to fix them; just let them dry, paint them as they are, learn from what I've done and do better with the next one I sculpt.

As I type, the primer is drying on everything. I can't believe I got everything assembled and primed this fast. I was expecting to be assembling everything throughout most of this week. Hopefully, I'll start painting tomorrow or Wednesday.
Email ThisBlogThis!Share to TwitterShare to FacebookShare to Pinterest