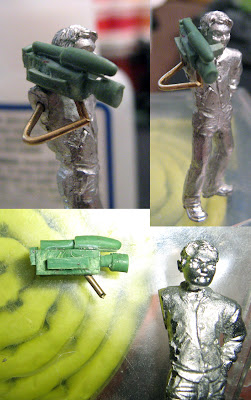 This little project is a touch more ambitious than I'm comfortable with, but my paranormal investigators needed a cameraman. The figure is the "jock" from Reaper Chronoscope No. 50090, "Townsfolk: Jock, Chick, Nerd." His right arm was originally holding a football tucked close. The arm was easy to clip and file away to give me a "blank slate" to work with.

I cut the pieces of the camera out of cured green stuff. I can't cut a right angle worth a crap, so I hope that the novelty of the figure is enough to distract folks from the rough angles. It's certainly not a bad piece of work on the camera- I'm happy with the results; there's just room for improvement.

The tough part (for me) will be sculpting the arm, especially the hand. Luckily, with the wire as a base, I can tackle this in stages. I'll do the arm first, let it cure, and then do the hand later. I could also cheat, and just find a fist from a figure in the bits box to add to this figure.

And yes, in this modern world where everything has a digital camera the size of a pea attached, I chose to go old school with a large camcorder. To me, it just looks more natural. That, and this whole project was indeed inspired by a 1980s movie (Ghostbusters.)

Other news: I was just over at the Reaper site (looking up the number of the figure above); they have a new range called "Bones." It looks like unpainted plastic figures (NOT resin.) Nice figures and cheap- I may have a go at one or two- Purple worm is $2.99?!
Email ThisBlogThis!Share to TwitterShare to FacebookShare to Pinterest