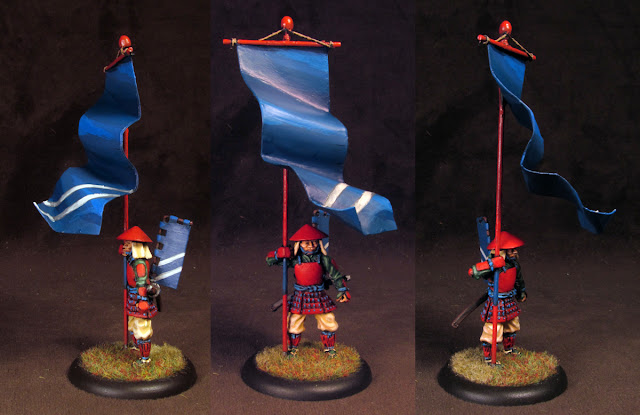 Since Kaage's retinue has a banner carrier, I went ahead and made one for my Red ashigaru group. This figure already had a nagae yari (long spear), so I went ahead and turned it into a banner pole. I gave the banner some wind action to give movement to the static figure.

The banner is just some paper cut from an old Wargames Foundry catalogue pamphlet (my favorite paper for making flags and banners.) I cut it double sized, folded it in half lengthwise supergluing the two halves together, then folded/curled the banner before the glue had time to set; this helps the banner to hold its wind-swept form.

I'm giving the primer a little extra time to set on Kaage's force. Painting should start soon.
I also have my market goods to paint. Hopefully, I'll start everything sooner than later.

I've organized my collection into rough buntai (warbands) for playing "Ronin." I have two bushi buntai, and an Ikko Ikki buntai (my peasants and a couple samurai). I also have plenty of extra samurai, armored and unarmored, as well as some ninja to fill in all the blanks.

I'd like to make some bandits, but that'll be sometime in the future after I work out some new conversion ideas. North Star Figures has some great 28mm warbands for the new game, but I'm playing 42mm since I already have plenty of figures (and they don't cost that much more than the 28s.)I'd love to create in 42mm the bandits North Star is offering.