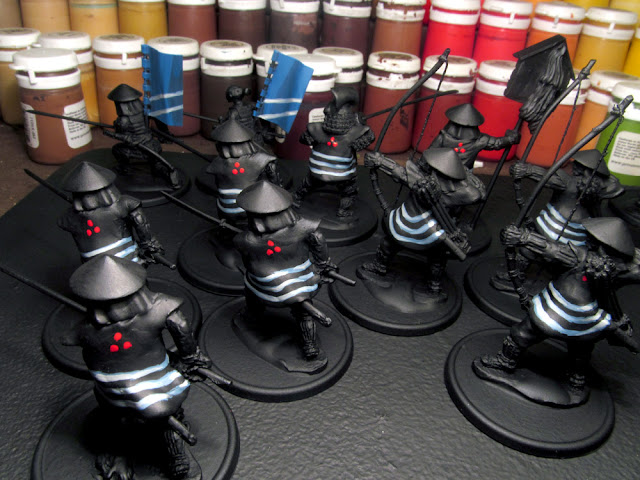 I went ahead and painted all the haori jackets. I'll be doing assembly line painting for all the parts that will be constant among Kaage's retinue -- haori, havelocks, armor, weapons. Then I'll slow down to paint the clothing and armor lacing on each individual. I'll try to post as I finish each group (spearmen, bowmen, then Kaage with his banner man.)

The two samurai in the back with the blue sashimono are for my other warband which I've simply dubbed the "reds" for now, owing to their red armor. I also have two unarmored samurai yet untouched, who will be a couple more ronin. This latest batch is proceeding nice and slow, which is what I had hoped. But I think they'll be done in time for the arrival of Osprey's Ronin rules.

Note: Those bases are 40mm bases from Proxie Models. You can see all the real estate on them -- lots of space to spread grass and rocks and flowers. I'm not sure how individualized I'll be making these bases; there might be a random rock, flower bush or tall grass clump here and there.
Email ThisBlogThis!Share to TwitterShare to FacebookShare to Pinterest