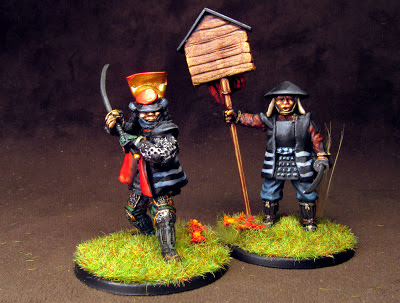 And finally, here is Kaage Kazuhito himself, along with his sashimono bearer. The banner man/sashimono bearer started off as an ashigaru standing with a yari. I simply replaced the yari with a wooden sign sashimono I made using green stuff for the sign (and heavy tassles), and plastic for the "roof" pieces. I added the sword to the sashimono bearer almost as an afterthought, but I think it works great.

The figure I used as Lord Kaage started off as an armored samurai defending himself with a spear. I rotated each hand which gave the figure an almost perfect stance for holding a sword. And for that sword, I chose a nodachi, which I hammered out myself from brass rod. The hand guard was sliced off of a cylinder of cured green stuff.

I also used green stuff to make the helmet crest. This took a while to get it even and smooth, but I'm happy with the result. Historically, this style of crest was meant to represent a cliffside that two samurai fell over while engaged in unarmed jujitsu during a battle (Kato Kiyomasa and an unnamed opponent at the battle of Shizugatake.) I chose the crest design as a piece of irony for Lord Kaage; he is secretly a coward, who dons the heaviest armor of any of his men, and the largest sword, with no intention of ever engaging in one-on-one unarmed combat with his enemies.

And, of course, as with the rest of his retinue, Kaage and his sashimono bearer have both been given haori jackets.

I love how this group of figures looks together. I based their haori designs on one of my unarmored samurai wearing a jingasa (seen in the group pic below.) I hope my red faction looks half as good as these guys come out; it might be difficult though because my red faction is simply a few of my figures repainted in red armor, and all bearing the same sashimono; there is no gimmick or overall theme to them. Maybe they'll look better than I think, once they're finished.