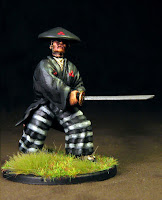 I chose the natural wood for the spears because it contrasts nicely with the darker haori. I think I'll paint anything wooded the same way, which mostly will be spears, the bows and Kaage's banner (the wooden sign.) Perhaps Kaage has some spiritual background in which all wood his forces use must be pure/unpainted.

The haori design matches the costume I gave one of my unarmored samurai. This was intentional. The unarmored samurai will be Kaage's right-hand man, who is so skilled with his blade that he chooses not to wear any armor.
Email ThisBlogThis!Share to TwitterShare to FacebookShare to Pinterest