I finished the spearmen of Kaage's retinue. In case you missed previous posts, these are 42mm figures by Steve Barber Models. 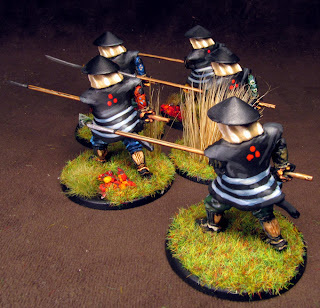 I've added the haori jackets using green stuff. Steve's ashigaru figures come with (steel) nagae yari (long spears) with separate cast spear heads, but I replaced them with smaller spears made from hammered brass rod. I chose to do the smaller spears so that the figures will be easy to move around the game table without toppling other figures, as well as to make it easier to store the figures in a case.

I still have some archers, a banner man and Lord Kaage himself to finish the retinue. I also have a couple ashigaru to paint for my red forces, and I have a couple unarmored ronin/samurai yet to paint up.

And I've been informed by my friend Jeff that his Reaper Bones figures have arrived. Oh, and I also have some Cast in Ruin (Gamma World-inspired) figures as well as my first batch of Low Life figures. I won't have to buy any new figures for a while (though, I might get a few more samurai once I work out some new ideas I'm thinking of.)