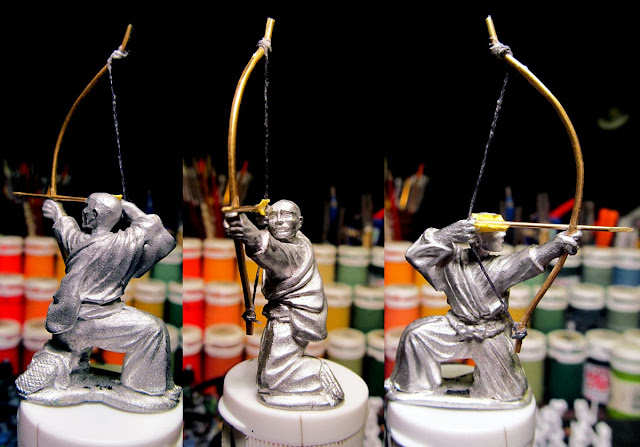 Not much new, just keeping a log of progress. This is also a better picture of the raw figure, so you can take a look at Steve's fine work (there's even some "tread" of straw on the bottom of that sandal.)

The figure is all converted with a new bow, strung with an arrow. I drilled a hole through the hand to feed the string through. Before that, I treated the string/twine with a small coat of superglue to give it strength and add a little rigidity. I also drilled a shallow hole/notch between his first two fingers so the arrow would sit nicely

The arrowhead was made with just a couple hits with the hammer, and a bit of filing. The vanes were made with thick paper, cut with an X-acto knife and placed with tweezers and superglue. They came out a touch larger than I wanted, but not enough to bother me.

The figure is also primed; I'll probably start painting tonight. Probably a saffron kimono/hakama and a black undershirt. It should be done by the weekend.

1,000 posts!
I wasn't paying attention, but somewhere a half dozen posts ago was my 1,000th blog post. That's a lot of gab about minis. I don't think I even have 1,000 minis- I hope I don't have 1,000 minis.
Email ThisBlogThis!Share to TwitterShare to FacebookShare to Pinterest