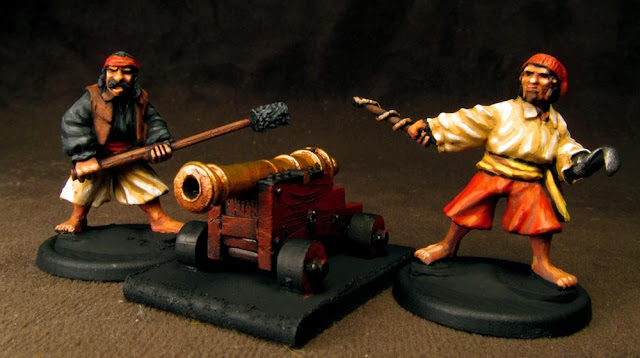 Here's a ship's gun with a couple crew. I replaced the ramrod with some brass rod (and drilled out and reused the sponge from the old ramrod.) I also drilled out the gun barrel a little bit to give it a better look.

This is the last of this first group of 13 pirates (and 1 gun.) I chose that number because this smaller group (and the gun) will fit in a small Chessex case. I'll continue with some more pirates, to fill a second small case. If I do more after that, I'll try to fill out a regular Chessex case. That, and it'll be easier to sell a whole hell of a lot of pirates rather than my little landing parties.

I still need to base these before I "officially" offer these for sale; I've also already had a couple enquiries, and they'll get first pick. And if these don't sell right away, the little crew will just get bigger :)

Before painting more pirates, I'm going to try to paint a Bones fig or two, at least until they piss me off, then it's back to the more fun stuff. Maybe I'll alternate.