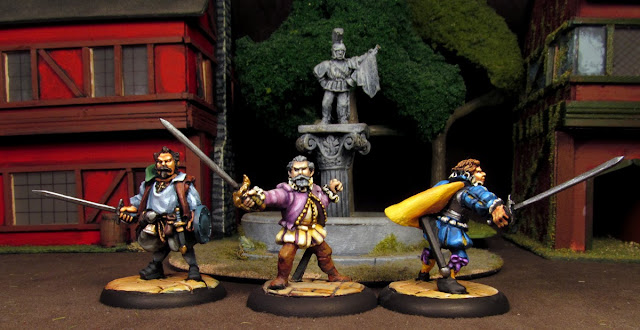 When I heard that Two Hour Wargames was coming out with a new ruleset call "By Savvy or Sword," I knew I'd be getting them, because I already had the figures and terrain. I dug out the old figures, and they were in varying degrees of disrepair. 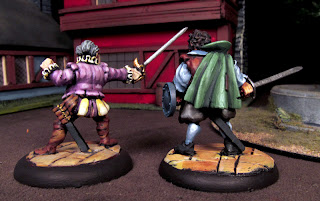 Some needed rebasing, some needed repainting. And I had since learned how to hammer out my own swords, so the first thing I did was make new rapier blades for all of the swordsmen. After seeing how the first blade looked on a figure, I knew I had something that was going to look nice.

Here are the first three (pictured above.) The figure in the middle has not been repainted or rebased; the only thing I've done to him was to replace the blade. I can't remember when I originally painted him, but it must have been in the past couple years, because that's one of my better "early" paint jobs. 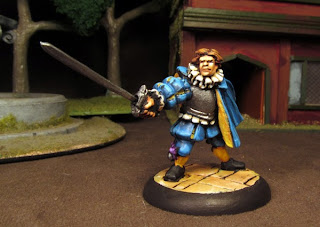 The other two figures weren't bad, but I still wanted to start fresh, so I stripped their paint, reprimed and had another go. Just like the pirates, these were fun to paint. I believe these were sculpted by Mike Owen, who did a good job of creating nice sweeping planes on the figures, combined with just enough detail to make the figures interesting, but not too difficult to paint. These would make a good intermediate project for someone learning to paint.

A quick note on By Savvy or Sword: The rules look like they cover the Musketeer era, 1625 onward. I've chosen the Elizabethan era (well, those are the figures I have, anyway) which starts about 50 years prior. But honestly, I don't think there will be much different save for some slight changes in costume. Even still, I have sculpted my own Cyrano (who is later 17th Century,) because every swordplay setting needs a poet-warrior. You'll be seeing him a little later. 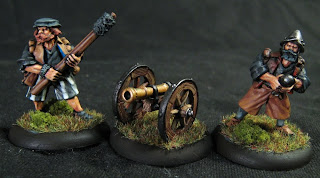 My collection isn't large. I'll be painting only about 20 figures. I do have some others (Sea Dogs) I painted for the second Foundry Painting Guide. I'll probably dig those out, too, though, I won't be redoing any of them. They are mostly halberds and muskets, along with a captain and a small cannon, all based for the jungles of the new world. These newer figures are all based for fighting in the city, Shakesperean style!
Email ThisBlogThis!Share to TwitterShare to FacebookShare to Pinterest