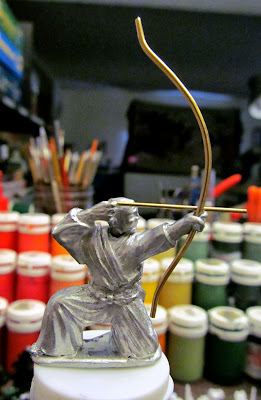 Not much to show yet except this sweet sculpt from Steve Barber!
I think this is one of Steve's better sculpts in his samurai range, but I'm probably biased since I commissioned him to do this specific pose (It was a good price- I recommend Steve's services if you're looking for a figure that you can't find elsewhere).

I still need to hammer out a tiny little point and add some vanes to the arrow. I also need to string up the bow.

The bow is not in full flex by design- the archer will give it a full pull when he brings the bow and arrow level with his chest. I wanted this high draw since it was distinctly Japanese.

And yes, I've replaced the bow with my own brass version- but Steve's bow is just fine.

Even though I don't have a Sohei faction among my figures, I'll probably do him up in Sohei colors (saffron and white) to make him pop a little more.

With a lot of long, graceful lines, I look forward to putting this figure under the brush.
Email ThisBlogThis!Share to TwitterShare to FacebookShare to Pinterest