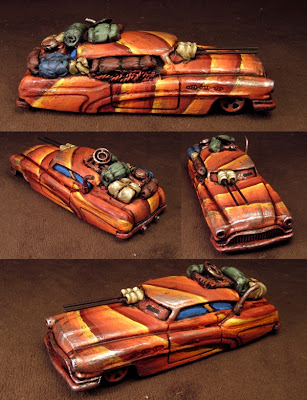 This is one of my original cars. I wasn't happy with the first way I did the car, so I reprimed and rebuilt her into something a bit more post-apocalyptic.

I added some baggage, a stovepipe on one side, and a pair of .50s. Then I decided to go wild with the paint; this scheme is supposed to be a camo pattern of sorts, but the people of Septimontium also have an appreciation for art, so this pattern also represents a sunset.

I'm not sure if I like it, though it's certainly striking. In any case, I like it better than the original scheme I had.

This car, by the way, is a '52 (53?) Buick. I was lucky enough to see one at a local car show last week, which is what inspired me to redo my (toy) Buick. The original plan was to repaint my car just like the one I saw at the show (The show car was still in rust, but running; it was nice.) 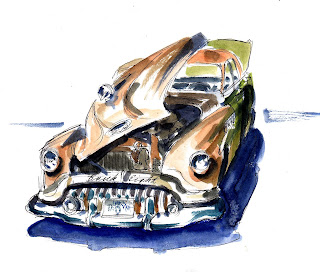 I love car shows. The cars are fairly easy to draw, and the owners like to pay you to draw their vehicles. That was an easy hundred bucks in two hours for me that day!

This is the first of two sketches I did of that Buick. It'd have been a nicer piece, but I was standing, holding all my art supplies while I sketched and painted this big beast.

The other sketch, I sold. But hey, here's a neat hot rod I also sketched; this one I got to keep: 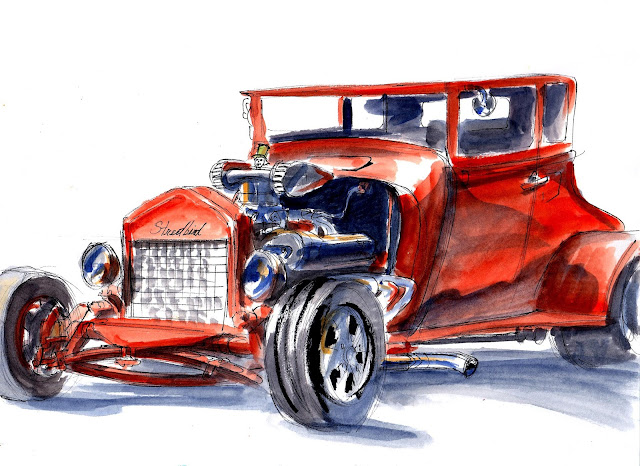