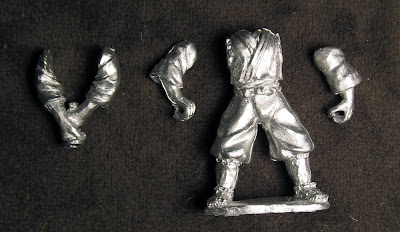 My Steve Barber 42mm multipart samurai arrived today! They look sweet. I have a little bit of work ahead of me: I still need to clean them up; there'll be plenty of fitting, drilling and pinning; and I want to do some conversion work on one of the four copies I picked up (He'll get the priest's head from the archer sculpt, and maybe a robe or sash.)

The sculpt includes a torso and your choice of heads (see below) and arms for either carrying a spear (or other polearm) or arms holding a sword. Both sets of arms can be adjusted up or down to provide different poses. One of mine will be holding his katana high, and the other low. The third figure will be holding a spear in a basic at-ready pose, while the fourth will be my priest holding a naginata as if he's about to swing it. And, with this multipart figure, none of these poses will require any chopping or sawing! 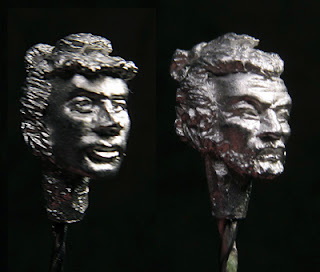 Steve also mentioned to me during my last commission that he can sculpt head portraits, so I asked, for this commission, if he could do me up a Tatsuya Nakadai and a Toshiro Mifune. Of course he could! Here they are. A fun unshaven Mifune and a great "Sword of Doom"/"Yojimbo" Nakadai. I could have easily had my own portrait sculpted, but I'm a white guy and would't look right as a samurai.

I'm not sure when I'll go for another commission. This latest sculpt will allow for a lot of conversions. I (or any of you) could pay Steve to sculpt some more arms and/or heads to add to this multipart body. Or maybe a new torso that would fit the arms.

For a full figure, the next I might ask for would be either a samurai lord in robes (think the Lord in "Ran"), or maybe some lower-ranking samurai official in kimono with a haori jacket over it. Another idea I was thinking of was a multipart, barechested peasant who could be armed (as a peasant or a bandit), or given "civilian" arms to carry baskets, goods, or even (with two such peasants) a palanquin. I'd need to pay to have the palanquin sculpted, too.

These are just thoughts; I need to save up a little money first (Not to say the cost is prohibitive; Steve offers some good prices for his work. If you're thinking about something, check him out!)
Email ThisBlogThis!Share to TwitterShare to FacebookShare to Pinterest