This isn't the ruins of an entire castle, obviously, but it's a nice little corner. The corner can serve as either an objective, intervening terrain or simply a piece to make the table look nice. It was inspired by the ruined castle seen in "Ran." 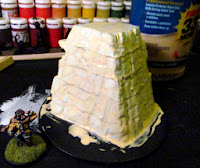 My friends Jen and Bryon came over to paint and build some terrain with blue foam, and I built this little corner from the scraps (and based on a Proxie Models 120mm circle base.)

The foam was stacked and glued. I used a foam cutter to cut the angle into two sides, and to cut loose/jutting blocks on the reverse sides.

Then I used a pencil to engrave all the stone lines. I covered the whole thing in a layer of wood glue (white glue also works) to give it some strength, but the glue also ended up mostly filling in all the engraving work. 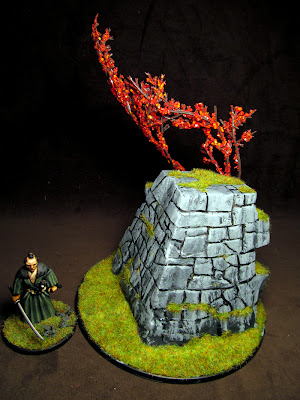 I gave it a generous coat of dark gray paint, followed by overbrushings of lighter grays. Next, since the engraved lines were still somewhat visible, I used a fine-line brush and black paint to pick out the rock lines. I used a light gray/white to highlight to top edges of most of the stones to further define them.

Finally, I added a floral stem scrap to be a small fall tree, and used static grass to finish. That's a 42mm samurai standing next to the finished product, though, the corner can be easily used for 28mm figures.

I still might go back later and add some grass tufts or extra rocks, but I do like the clean look, too. Space is still limited in my apartment, but I think I've settled on my 42mm Japanese as my all-time favorites, so a few extras now and then for them doesn't bother me. I may even add a section of ruined wall to go along with this corner.
Email ThisBlogThis!Share to TwitterShare to FacebookShare to Pinterest