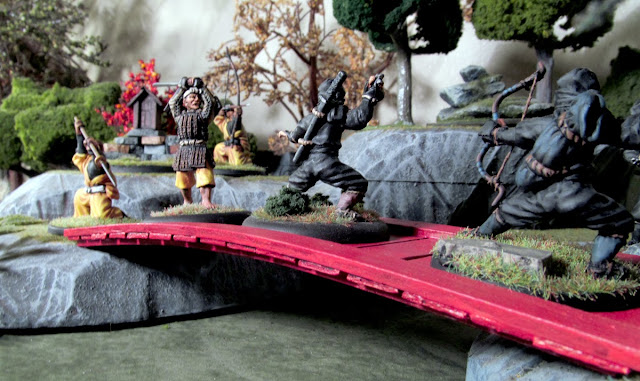 I put together this simple foot bridge as a side project, during those little moments of waiting for paint or glue to dry. I had intended to put rails on it, but decided against it, because they would have added a modicum of fragility to the piece. Even without the rails, I think the bridge looks nice, and it's certainly functional.

The long beams (bass wood) were all soaked in water for a few minutes and then gently bent and held into shape on a jig I built for this job. Later I laid all the planks (strips of mat board). A few coats of red paint, and the bridge was done.
I still have the jig, so if I decide to add rails later, I can bend some new wood strips to the same camber as these.
Email ThisBlogThis!Share to TwitterShare to FacebookShare to Pinterest