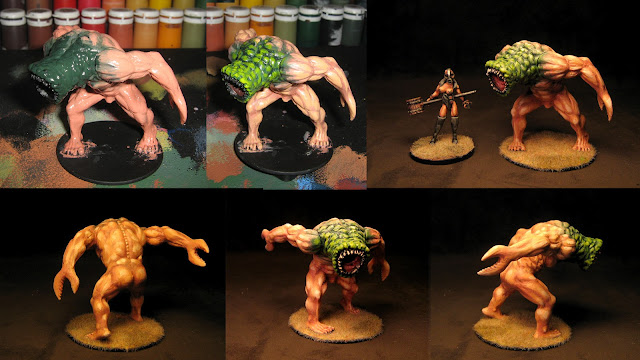 This was an easy figure to paint, especially due to his large size and great sculpting.) The most difficult part was cutting out the large, cartoonish tongue that was sculpted on to the original figure. Even that step wasn't all too difficult (though it did require a power drill.)
And what a lovely, large mutant fighter he will be. That's a 54mm figure next to him in the picture, by the way. And the price was right for such a great sculpt; he was only $9.99 (and I think it was around $15 total with shipping.) I enjoy being able to get monsters and mutants on the cheap.
Next up will be some more apocalators (I'm waiting for David at Bronze Age to get back to me.) In the meantime, I may paint up and post a random item or two. 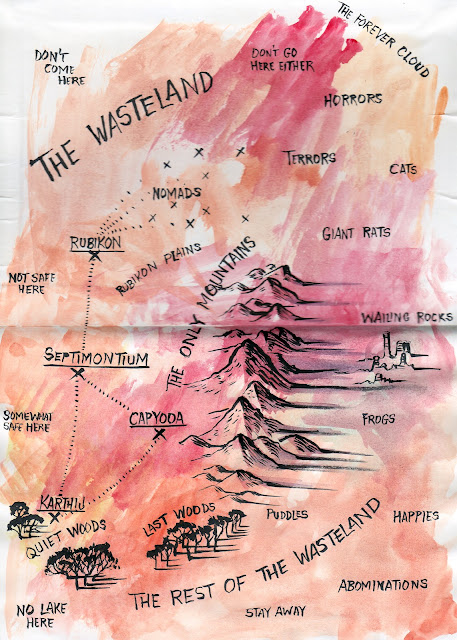 Septimontium: So I was at the bookstore yesterday looking for some post-apoc inspirational literature, There wasn't a lot (there was none.) So I decided to go ahead and create my own post-apoc world; More or less, I decided I'm going to extend my world of Septimontium which I wrote about a little while ago.
When it comes to RPGs or board games, I enjoy (creating)  the setting as much, if not more, than the actual playing of the game. Septimontium, at most, will be used as a huge backdrop to playing Red Sand Black Moon, providing some context to whatever narrative my imagination might weave around a match.
I bought a new journal (during that same visit to the book store yesterday,) and started my small endeavor by redrawing (and elaborating on) my original Septimontium map. I don't really have any grand plan, I'm just gonna make it up as I go along. In fact, I've already started naming different animals/mutants (seen down the right side of the map) without knowing what they look like (except the Frogs, the main part of this blog post.) I figured a few random words - puddles, horrors, happies - would help get the imagination working.

Art note: For the artists out there who might want to know, this map is simply watercolor and brush and ink (specifically, I used a Pentel pocket brush pen.)