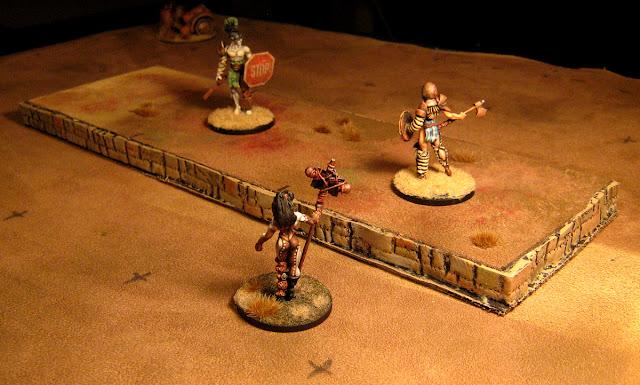 The Karthij arena (on which you've seen my few RSBM battle reports) is just a small field next to the Quiet Woods. But one of the most well-known arenas is the Pompay Portico in the city of Septimontium. The arena consist of the main arena with the raised portico in the center. (A proper "portico" will have columns supporting a roof. This one does not.)

The Pompay Portico is home to fights for many festivals, but it's most famous for hosting the Conspiratorial Games. 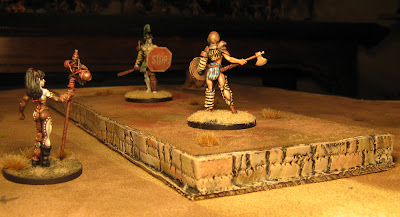 There are other arenas in the Wasteland. The "Rock Patch" of Rubikon is punctuated with rocks and boulders. The rarely used and heavily treed "Wood Pit" near Karthij is situated in the middle of the Quiet Woods, where lurking horrors sometime interrupt matches. Capyooa's "Hareen" has seating for the spectators carved right into the rocky hill bordering the arena. And there are the many corrals, fields and dugout pits hastily made by the nomads for quick and dirty gambling matches. But the Pompay Portico is the best-known and draws the greatest fighters.

Hobby notes: My "portico" is simply a piece of blue foam, carved with a ballpoint pen, mounted to a masonite board (to help prevent warping), primed and painted. As a final step, I mounted a piece of VFF suede fabric so the portico matches my arena floor. The size of the portico is 5x15 inches (or 3x1 "areas" in game terms.) I also have a house rule if someone falls off the portico (there's no injury incurred, just a quick roll to see if the fighter is able to keep his feet.)
Email ThisBlogThis!Share to TwitterShare to FacebookShare to Pinterest