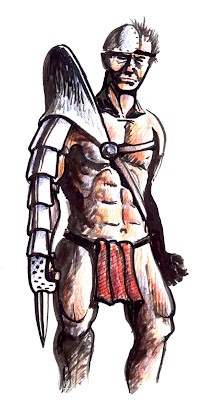 Just wanted to update you all on a couple projects I have coming up.
I'm ordering a couple more 54mm generic figures from Bronze Age Miniatures. One will have the armor shown in the drawing here.
I will for sure give him the extra-tall galerus (shoulder armor), along with the armored sleeve ending with the pata-like dagger. I'm still not sure on the helmet (though, I'm not against the little "half-shell" he's wearing in the picture.) If I don't keep the half-shell, I may go for something a little more Brom in style, whatever that may be.

I'm also thinking about losing the loin cloth and having this guy go "Greek," (fighting naked) to emphasize his role as a "light" gladiator/apocalator. Lastly, I think I may paint up his body in a Waiteri scheme. (I may simply incorporate my Waiteri tribe into my post-apoc setting.)

I've actually began my other project. I purchased this little fellow (shown below) from Fantasy Flight Games. He's one of their prepainted miniatures (God of the Bloody Tongue) for Arkham Horror. I intend to use him as a mutant apocalator (playing Red Sand, Black Moon.) I wasn't keen on the tongue, and I've already cut it out, and hollowed out the mouth. He's still a magnificently nasty looking beast.

For colors, I plan on doing him up in regular "human" colors, though with a green head (to remind folks of the "radioactive" aspect of the monster.) I'll just need to give him a name; I think I'll just have the citizenry of my little world (Septimontium) call his kind the Froggies (due to their green heads.)

Last note on my froggy: The plastic felt a little less "soft" than the other figures, so I tried a light layer of spray primer- and it worked- no tackiness that usually comes with priming soft-plastic figures! I'm just waiting for the primer to dry before I paint this big fella (the figure next to him is 54mm.)
By the way, the paint job he came with isn't half bad. I actually thought about not repainting him ... but just for a second. 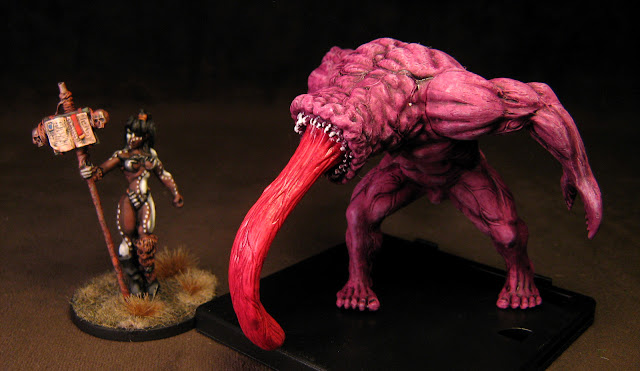