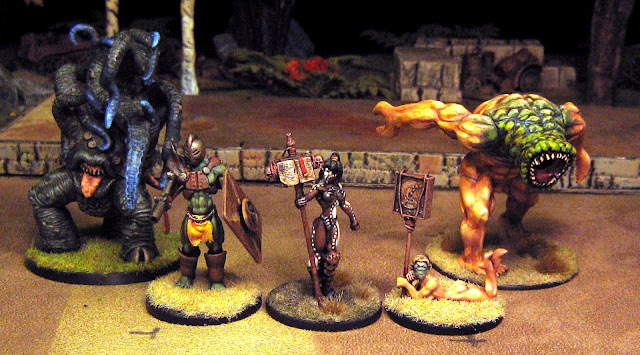 Since I'm done with my 54mm apocalators (for now), I figured I better get a group shot. So here they are. Many of these figures were actually converted for playing Qwik (the two chain fighters and all of the two-handed weapon fighters.)

I've also moved the flamethrower out of the fighter ranks and into the ranks of arena officials; I was playing a game (using converted Red Sand Blue Sky rules) a few months ago, and the two players contented themselves with dropping back and catching their breath for many turns. So I introduced a third fighter to "prod" them to combat. That new role will be filled by Mr. Pyroeis.

I'm still searching for a couple more nice, generic, abominable monsters to add to the ranks of beasts. There are a couple more Fantasy Flight Games prepainted Arkham Horror monster that have been released that may fit the bill; Maybe I'll try sculpting or converting my own?
Email ThisBlogThis!Share to TwitterShare to FacebookShare to Pinterest